Our First Day of Intro to Team Summit

Our First Day of Intro to Team Summit

I am what you call a “Researcher.” If you are one as well you immediately know what I am talking about. I’ve joked before that Research is my coping mechanism for life.  Thanks to the internet I can now spend hours figuring out solutions to ANY issue that may come up! I mean, there is probably even a YouTube tutorial video for any topic I may need to extend my knowledge base with. It’s extremely empowering and other than the fact that my husband has permanently banned me from WebMD after diagnosing myself with cancer one too many times, it’s pretty much been a great thing and SO much easier than using my Encyclopedia Britannicas…

Not surprisingly, before I became a mother, I read TONS of books on parenting so that I was an expert by the time I had my son. I’m sure you can draw the conclusions and actuality of events following once I had a baby in my arms…   All of that being said, I took over TWO YEARS of thinking, researching and making pro and con lists before I signed up my son, Sawyer, for Team Summit. It was never the program itself, which I always highly valued, but more thinking through the actuality of the time commitment, financial investment and “will my darling child take this privilege seriously.”

When I signed him up finally, after pestering the good people at Team Summit with questions for said amount of time, I think I subconsciously expected confetti to fall or a trumpet from the sky to sound. I already knew most of the Team Summit staff from the Bubblegum Race Series and their presence at local events in Summit County, so it was similar to joining a family who already knew you and loved you for who you are (perhaps “tolerated” is a better choice of words!). I felt at home immediately and completely confident and ready for the first day.

So, after talking with several other Team Summit families, I am here to share with you what the first day was like for many of us with the goal of either normalizing it for you to know you aren’t alone in this- or encouraging you to take that next step and sign your kid up next year. It’s worth it, I assure you. 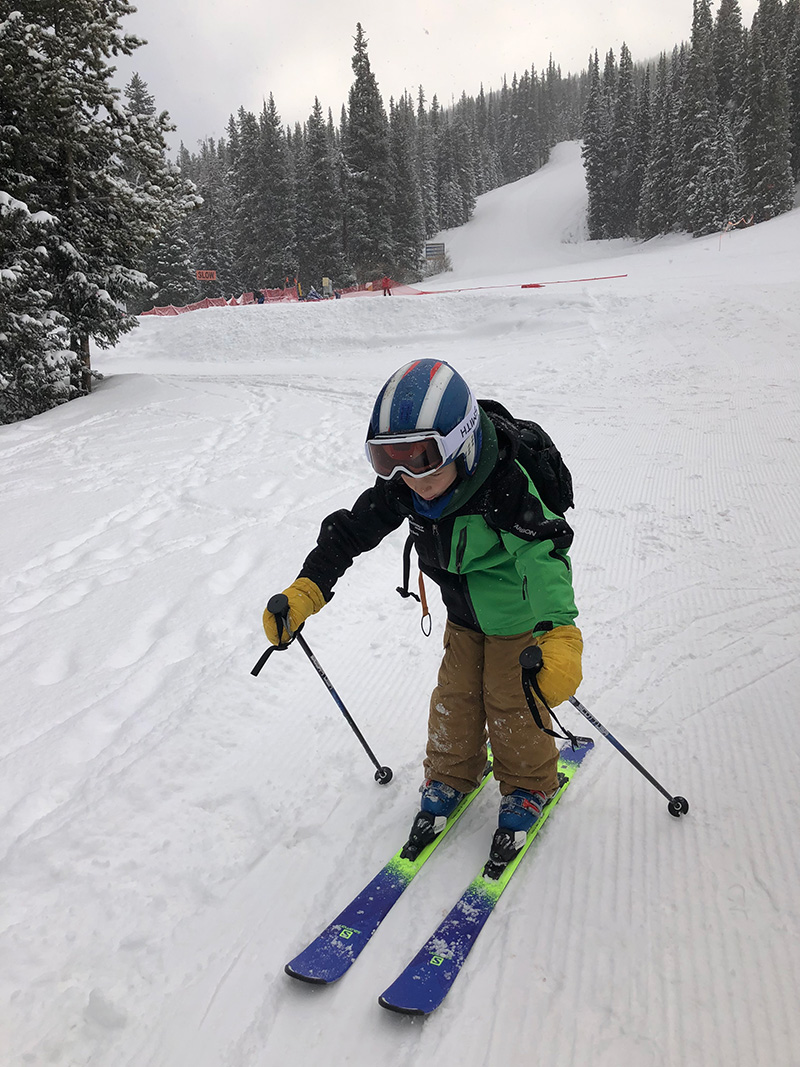 The first day of Intro to Team Summit felt a lot like a first day school after a long summer.  There were those feelings of adrenaline, slight insecurity where you wonder what to do with your hands, subconscious comparison of your kids’ gear to the other kids’, in-general confusion at what to do and where to go once you made it to the herd of children in Team Summit coats… and yet, there was also equally strong the adult perspective of we are all in this together.

Our day started off great. Although we are not morning people, we got up on time and ate a healthy and nutritious breakfast for a full day of skiing. We got Sawyer’s backpack packed with his healthy and nutritious lunch and snack, sunblock, water, gatorade, a second sunblock (because he didn't like the first one), a second pair of mittens (not sure why), hand and boot warmers, chapstick and essentially the kitchen sink. We had planned ahead the night before to have everything ready to go, but all of the items we didn’t think were a big deal the previous night came back to haunt us like the ghost of Christmas past...

“Sawyer, go get dressed now, please. Make sure to put on your long underwear.” The last part was redundant because he knows to put on a base layer correctly. Or so I assumed.

Sawyer came out in *jeans*. I repressed the who skis in jeans jokes and patiently reminded him to put on his long underwear. He disappeared for a minute and came back still in jeans.

“I want to wear jeans under my snow pants.”

“Umm. NO. You need to have synthetic material on, not cotton. Go change NOW.”

“But MOMMMMM I HATE MY LONG UNDERWEAR! They are so itchy!”

“Sawyer. You are not going to ski with jeans on. GO CHANGE NOW! We need to leave soon!”

“I JUST WON’T WEAR ANYTHING UNDER MY SKI PANTS! I WILL BE FINE AND I WON’T GET COLD, I PROMISE!”

Now, I’m all about letting children experience consequences for their choices and learning from those choices, but the first day of Team Summit didn’t feel like the ideal time to let my “spirited” child learn this lesson. I gritted my teeth and compromised with a pair of sweatpants that were made from an outer layer of nylon or something, I’m honestly not sure. I just know they weren’t jeans.

I’ll skip over the “where is my Columbia neck gaiter?!” and the mid-layer arguments that ensued. He ended up wearing a *cotton* mid-layer sweatshirt and I think I shared with him such great parenting wisdom as, “FINE THEN JUST BE COLD!” because the Go Time alarm went off. We then discovered that one of Sawyer’s brand new ski poles were missing. ONE. Ben, my husband, and I clawed through our crawl space and found an oversized pair that had belonged to his brother.

We managed to roll in on time, snag a 15-minute parking spot by some miracle and we started walking over. That is when I asked my Ben if he had Sawyer’s ski pass. His stricken look confirmed to me that we indeed did not have the ski pass. Being the great adaptive couple that we are, Ben took off to get the pass and I took Sawyer to meet his coach and group. We arrived and I made pleasantries with some other parents also there for the first time.

I noticed that matte versus glossy seemed to be a ski helmet trend that I was unaware of before…. As I noticed helmets I also noticed the kids’ goggles.

Goggles. At that time, I realized that we had left Sawyer’s ski goggles back at the house upstairs in their perfectly protected case. Texting ferociously like a junior high girl texting her friends on whatever current social networking site is hot right now,  I let Ben know that we didn’t have the goggles. Repeat: we did NOT have the goggles.

Ben quickly texted back that he would pick some up.

We found the “color’ we were assigned and met our coach. Sawyer did great introducing himself and seeing his genuine excitement made me forget our stresses and reminded me why I was there in the first place. We were thrilled to discover that a friend of his from school happened to be placed on his team. His coach, Bernard, was incredible with the kids and I felt that instant comfort level that confirmed that we had made the right decision to do Team Summit this season.

Ben showed up with the pass and goggles at the perfect time and Sawyer headed out with his group. We stood there grinning for a few extra minutes-- before realizing that we had overstayed our 15- minute parking limit and RAN to the car.

So far Team Summit has exceeded our expectations. Another coach who I know personally, Ali, later remarked to me that she knew Sawyer had a great first day because he had the “same huge grin on his face at the end of the day that he did at the beginning.”  To me, that right there says it all and I am so excited to see what this season has in store for Sawyer and his group!