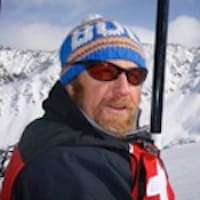 While his accomplishments are too numerous to count, this piece will just focus on his accomplishments in Summit County.  Leif was instrumental in creating Arapahoe Basin’s Avalanche Procedures and Protocols which allowed them to expand their terrain options.  He was the driving force of the installation of the Basin’s Weather Station atop Montezuma.  Leif is nationally recognized for his research regarding wet slabs and the effects of changing conditions on avalanches.

Leif Borgeson was a strong driving force in the creation of Team Summit’s Big Mountain Freeski Program.  When the idea of the program was tossed around, Carson was concerned about the potential risks behind such a program.  Leif told Chris Carson “don’t let fear stop you from doing things,” and helped TSC develop a plan to mitigate many inherent dangers of the sport.  His son, Ian, joined Team Summit’s Big Mountain team and eventually made it to the Freeride World Tour.

Leif passed away in 2011, unexpectedly, after hiking Highland’s Bowl, survived by his two sons, Ian and Aidan, and his wife, Denise.  His funeral had over 1000 attendees Patrollers from all mountains between Aspen and The Basin paid their respects as his ashes were flown by Flight For Life to the Basin.

While Team Summit recognizes one athlete for Excellence in Freeskiing with the Leif Borgeson Award, Leif’s impact went far beyond skiing.  Our community would not be what it is today without the efforts of Leif Borgeson.

What it takes to expand a Resort: https://www.denverpost.com/2007/01/14/avalanche-pros-probe-proposed-a-basin-area/
Wet Slab Research can be found on semanticscholar.org
Memorial Video: https://vimeo.com/20102602